NodeJS is a compilation of Google’s V8 JavaScript engine, a core library written in JavaScript. According to Ryan Dahl, the founder of the NodeJS, the target was to create real-time websites with pushing capabilities an idea inspired by the application like Gmail. So, the new NodeJS he ensures working in the non-blocking, event-driven I/O paradigm. As a result, after waiting  20 years today with the new NodeJS, we can ultimately have real-time web applications with two-way connections.

If you’re a JavaScript web developer and looking for new NodeJS hosting or dedicated servers for your web development projects, we are one of the best NodeJS hosting provider around the United States. Moreover, we have dedicated server cloud-based NodeJS servers to serve the speed and security to our clients. Further, with our hosting packages, we’re providing full NodeJS development for customer satisfaction.  Likewise, our other hosting packages we’re providing pure SSD storage,  Aspiration CDN for 100% uptime, and Patchman to secure your valuable codings. For more new NodeJS hosting package details click here!!! 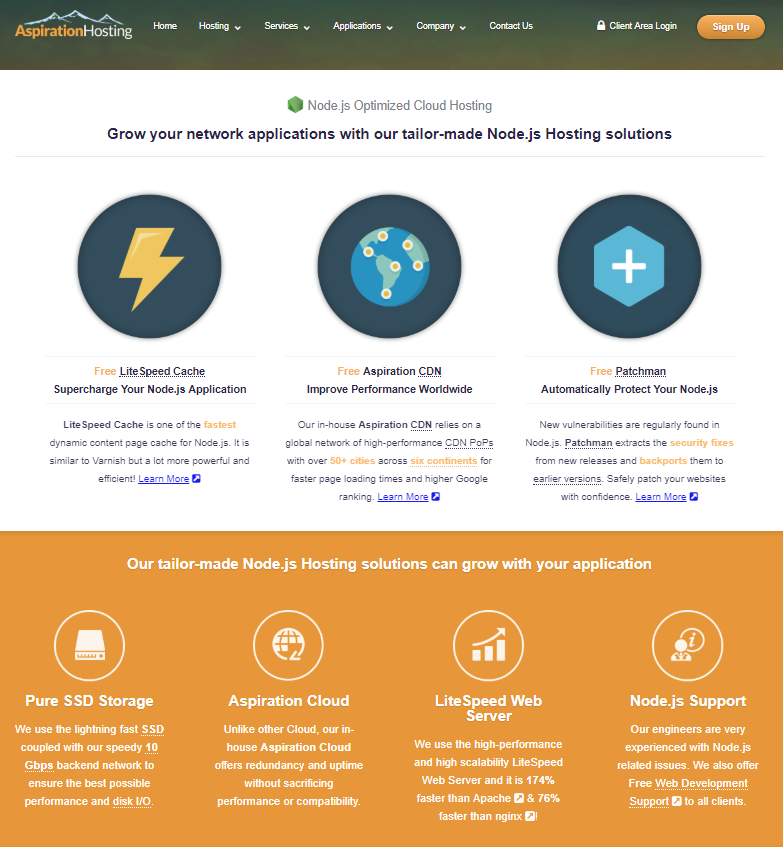 Though it is difficult to describe NodeJS in one sentence if I have to then I found the NodeJS as a real-time web application with push technology over web sockets. As we’ve had already mentioned that the new NodeJS is a two-way connection including stateless request-response paradigm.  Here both the client and server exchange data freely by initiating communication among them. Especially In the past the client always initiates communication. Furthermore, the new NodeJS based on the open web stack HTML, CSS, and JS, etc. using the standard port 80.

Now few people can argue that there is nothing new in NodeJS as we’re using similar technology since years in Java and Flash Applets. But if you look closely they’re more of the sandboxed environments delivers to clients by using the web as a mean of a transport protocol.  Further required extra permissions because of running in isolation and mostly operated over non-standard ports.

The popularity of New NodeJS among entrepreneurs and why?

By considering the advantages the NodeJS has become popular in the technology stack of many high-profile companies and plays a vital role for them.  To learn more about why enterprises should consider Node.js? Our readers can visit the NodeJS official page and read the short presentation on Foundation’s Case studies that have been made by the NodeJS describing their advanced features.

In the following sections below, I’ll try my best to describe the advantages of why you should also consider NodeJS. We’ll also discuss the bad sites of New NodeJS and if necessary How to replicate the NodeJS with some classic applications?

However, the main concept of Node.js is to use the non-blocking event-driven I/O to run across distributed devices. So it remains lightweight and efficient as data-intensive real-time applications.

Truly speaking NodeJs is not a magic stick which will dominate the entire web development business sectors. Rather it’s a platform that is able to complete specific tasks of web development. So, before going to implementation it’s necessary to understand How does it work?

Definitely, we don’t want to involve NodeJS in Cpu relevant operations. Basically, NodeJs is not suitable for heavy computation which increases the cost comparing advantages. On the other hand,  Node is more suitable instead of NodeJS for building fast, scalable network applications.  As Node is capable of handling a huge number of simultaneous connections and outputs means higher scalability.

In traditional web-serving techniques, every request or connection eventually generates a new thread which occupies the system RAM. As a result, sometimes fill out max available RAM.  In contrast, NodeJs works on a single thread and use the non-blocking I/O calls. That enables NodeJS to handle hundreds of concurrent connections in the loop.

For example,  if each thread occupies 1 MB of memory with it and running on a system of 8 GB Ram. It means the system will generate about approximately 8K concurrent connections including the cost of context-switching between threads. That is how traditional web-serving techniques operate. In contrast, using a single thread NodeJS can handle of over 1M concurrent connections, and over 600k concurrent web sockets connections. Simply we call it scalability.

Obviously sharing a single thread between all clients requests is a pitfall of coding web applications on NodeJS.

At the very beginning, heavy computation on NodeJS’s slows down the operations and can create issues for the clients. Since the system held up all incoming requests until unless the most recent computation being completed.

Next, allowing an exception Node.js event loop sometimes cause the termination of the Node.js instance.  So the developers need to be very really careful for exceptions either it can cause the program itself.

To stop and avoid the exceptions bubbling up developers uses a technique. Basically, they pass the issues back to the caller as callback parameters. By the way, today we’ve many tools to monitor the Node.js process and perform the necessary. And in the necessity, these tools are able to recover from a crashed instance.

An example of the use of the new NodeJS:

For instance, Chatting applications such as messenger are the most typical real example of implementation of NodeJS. Further chats are multi-user application and responses in real-time.

For the latest NodeJS features read this article.