As the process is bit longer here is the 3rd part of the article “Installing Magento Patch using SSH”. Here we’ll discuss the process of creating a back up for the Mage folder. So, in case of any data loss we can restore our Mage folder from back up. By the way Learn more about Magento patch list over here.

Create Back Up step by step:

First we’ll use the Change Directory command. Here the 2 dots following the command will move one level up in DIR tree. Next list DIR to see the Mage folder.

Secondly we’ll create the new folder and name it as “backup” using the following command.

Hence remember the backup folder needs to have the default owner and group as the Mage folder. Either we can use the following CMD to change the ownership of entire back folder.

Here in following CMD backup folder is designated to the Apache user and Root group by 1 dot. Again use “Sudo” in case you need admin access.

Now check the correct owner using CMD “who am I” as described below:

In next step, enter the following CMD to log in as an Apache user. After a while a new screen prompt. So, enter the password of Apache user account.

Note: The prompt will change. So we’re now in the bash folder of Apache user. As we’re logged in as Apache we don’t need to use “Sudo” here.

By using Change DIR CMD return to main location of Mage backup folder. Now check both “where you’re?” and “who you’re?” by listing DIR.

In this step using following CMD copy the Mage contents into backup folder.

After completing the copying process and it will return the system prompt. Next verify the contents of back up folder to ensure the copy process was successful. 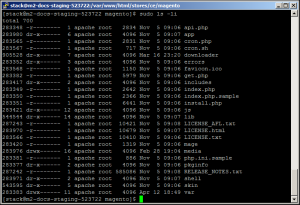